The True Story of Caroline Pickersgill and Her Star-Spangled Creation

Caroline Pickersgill came from a family of the best flag makers in Baltimore. She and her family proudly stitched the grand flag that gallantly whipped in the wind over Fort McHenry. But when the British attacked Baltimore on September 12, 1814, would those broad stripes and bright stars still wave strong? Would America still be free and the home of the brave? Join Kristen Fulton and Holly Berry as they bring life to the inspiring true story of one young flag maker and her connection to the iconic symbol of American patriotism that became the inspiration for our country’s national anthem. View Cover 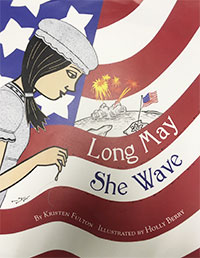 Long May She Wave